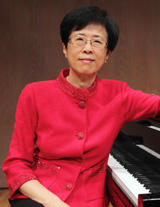 A graduate with distinction of the University of Victoria, May Ling Kwok first studied with Robin Wood at the Victoria Conservatory of Music and later with Gyorgy Sebok at Indiana University, USA, where awarded the distinguished Performer’s Certificate.
She is very active as a performer, piano teacher and adjudicator. Concert tours have taken her to the United States, China, Hong Kong, Malaysia, Mexico, Russia and Europe. She has appeared as soloist with the Victoria Symphony, the Montreal Symphony, National Symphony Orchestra of Mexico, Moscow Philharmonic, Vladivostok Symphony Orchestra, the Slovakia Radio Orchestra and the Czech National Symphony. She has given master classes in various countries such as Russia, China and across North America.